Posts Waiting To Be Read

So yesterday we were eating dinner and the silence was really bothering me. I asked anyone if they had something they wanted to share. Chase slowly pushed his chair back from the table and said “Well….”. I knew he was about to tell me something that would be difficult.

It turns out he has lost his packet for science class. He went to his teacher and told her he thinks he accidentally threw his out instead of an old test and asked if he could have another. She told him he would be getting a 0 and she would not allow him to have a second paper.

At first I was angry. He has a 98.5 in the class and I knew what a 0 would do to his grade. I told him he was in trouble and there would be no video games. After I thought about it I decided to call him downstairs and tell him it was okay. It was just a mistake and I knew he didn’t do it on purpose.

The bottom line is this. Life is so very hard and people expect so much from us. I even believe they expect perfection. In time, we learn to expect that from ourself as well. No wonder we feel like we can’t do anything right and that we are a complete failure. We hold each other to a standard that is just unattainable. The fact is, we are human beings. We make mistakes, we learn from them and we strive to do the best we can. Does throwing a paper out on accident make Chase irresponsible? No. It does not. It makes him human. People have bad days and chaotic moments and sometimes kids with ADD get distracted. Imagine that. The kid has a math test that he couldn’t finish the other day because the math teacher hasn’t bothered to bring him up to speed on the 8 days of information he missed while he was out sick. To me, that lends itself more to irresponsible than human nature. He has a broken arm that makes it difficult to get in and out of his locker and put his papers in the necessary binders. He is doing a great job in school and this is the first time something like this has happened. I have to wonder how many times this teacher has misplaced something. Geez…half the time I am looking for my cell phone while I am actually talking on it. Does that make me irresponsible?

This expectation of perfection has got to be stopped. It hurts people and makes them feel really bad about who they are and what they do. Let this be a lesson. Give people a break. It is not always your job to punish someone or teach them a lesson because they made a mistake they already feel bad about. It is your job to look them in the eyes and say it’s really okay, we all make mistakes. We cannot hold people to a higher standard than we are capable of ourselves. What do you think will be the more important lesson in the totality of his lifetime? A zero on a paper or someone saying it’s okay, we all make mistakes? Let me know what you believe. 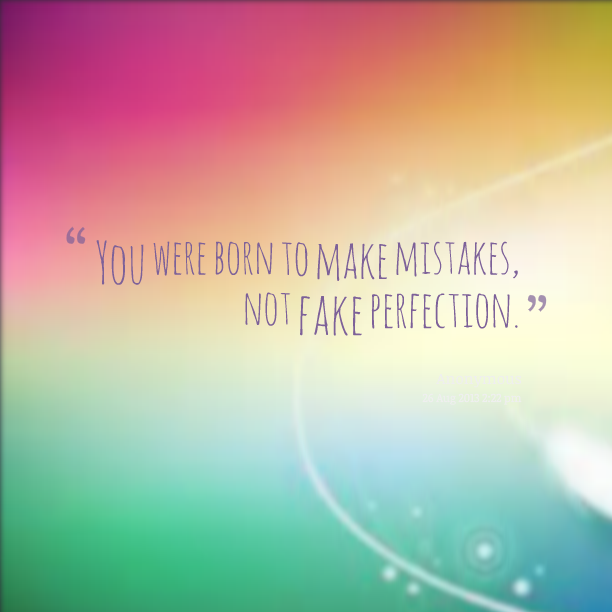